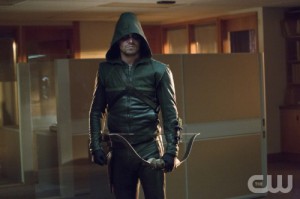 I discovered, this weekend, much to my surprise, that the new show Arrow is quite watchable. It’s a sort of gritty, soap-opera friendly reboot of the Green Arrow character form DC Comics. In this version, he’s a rich kid, son of a wealthy industrialist, who is lost at sea and spends five years on a south east Asian island surviving and becoming a bad-ass.

When he gets back, he embarks on a scheme of bloody revenge against the corrupt businessmen of Starling City. It’s interesting watching the show in a post-Occupy world; Oliver Queen is a scion of the 1%, going after the 1%, theoretically on behalf of the 99%. Thus far, he is only going after the illegally evil 1%ers, though, the ones who use their money to traffic in drugs, extortion and assassination. While he’s talking about stopping the powerful from abusing their influence on those who lack it, the show stops short of having him attack the system that provides the mansion he lives in and the expensive gadgets he uses to fight crime. It will be interesting to see if the show is willing to cross that line.

I cannot help but contrast Arrow with a couple versions of Batman. My favourite version of Batman is, I think, the 90s Batman: the Animated Series. Like a lot of TV of that era (I’m thinking of Babylon 5, here), it had a lot of cheese, but also enough brilliant moments that I remember those more clearly than the cheese. Animated Bats is notable for the way the villains are written – most of the bad guys have a strong motivation, some past wrong that drove them to become criminals. In some cases, the show looks into the grey area between what Batman does (justice?) and what the bad guys do (vengeance?). In practice, though, what it boils down to is that most often, some evil rich guy screws over some poor schmuck, who cracks and puts on a costume to extract revenge, and Batman stops the villain while the rich guy walks away. The difference, when it is highlighted, between Batman and the bad guy, is that Bats isn’t willing to kill or endanger innocents. Arrow, on the CW show, is essentially a Batman: the Animated Series villain. Interesting contrast. 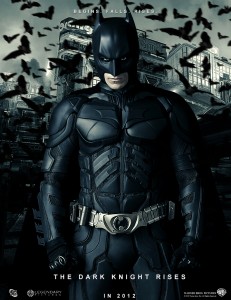 The more obvious and timely comparison, of course, is to the Batman of the Christopher Nolan movies. Both take a classic comic character and deliver a dark, gritty version. I think the Nolan Batman is a relatively subtle deconstruction of the idea of Batman. The Dark Knight Rises comes right out, several times, challenging the right of Bruce Wayne, child of privilege, to be the person meting out justice on his own terms. The three movies raise the question of whether or not Batman is inherently fascist, particularly using a traditional platform of inherited wealth to fund his battle. I think the biggest twist that Nolan brings to Batman, though, is making him a Dramatic Hero rather than an Iconic Hero. To paraphrase Robin D. Laws, an Iconic Hero encounters challenges, and by staying true to his Iconic Nature, defeats them while remaining unchanged. The Dramatic Hero, by contrast, is a character in a state of conflict. He encounters challenges, and is either changed by them or destroyed by them, even when he triumphs. Every Batman before has been, essentially, Iconic – even the classic Knightfall story line in the comics where Batman’s back is broken is essentially a premise threat story, where the drama is provided by putting Batman’s Iconic nature at risk before restoring it. Nolan makes Bruce Wayne into a person whose nature is changed by his experiences. The tension between his private war and the desire to move beyond the trauma of his youth define his personality, and ultimately rip Batman apart. I think Tim Burton’s Batman flirted with similar themes, but ultimately felt the need to cling to the idea of Batman.

I suspect Arrow’s Oliver Queen will prove to be Iconic as the show goes on – it’s too hard to maintain a Dramatic Hero’s arc on a show like Arrow without losing track of everything entirely. Which highlights another thing I liked about the Nolan Batman – it had a solid ending. It left things open for all sorts of followups, but really, Nolan wrapped up all of his threads. Arrow, being an episodic soap opera type TV show, will shoot for infinity, and try to find as many ways as possible to play with the premise without losing it.